Teaching philosophy in Papeete was a second birth among Polynesian families. 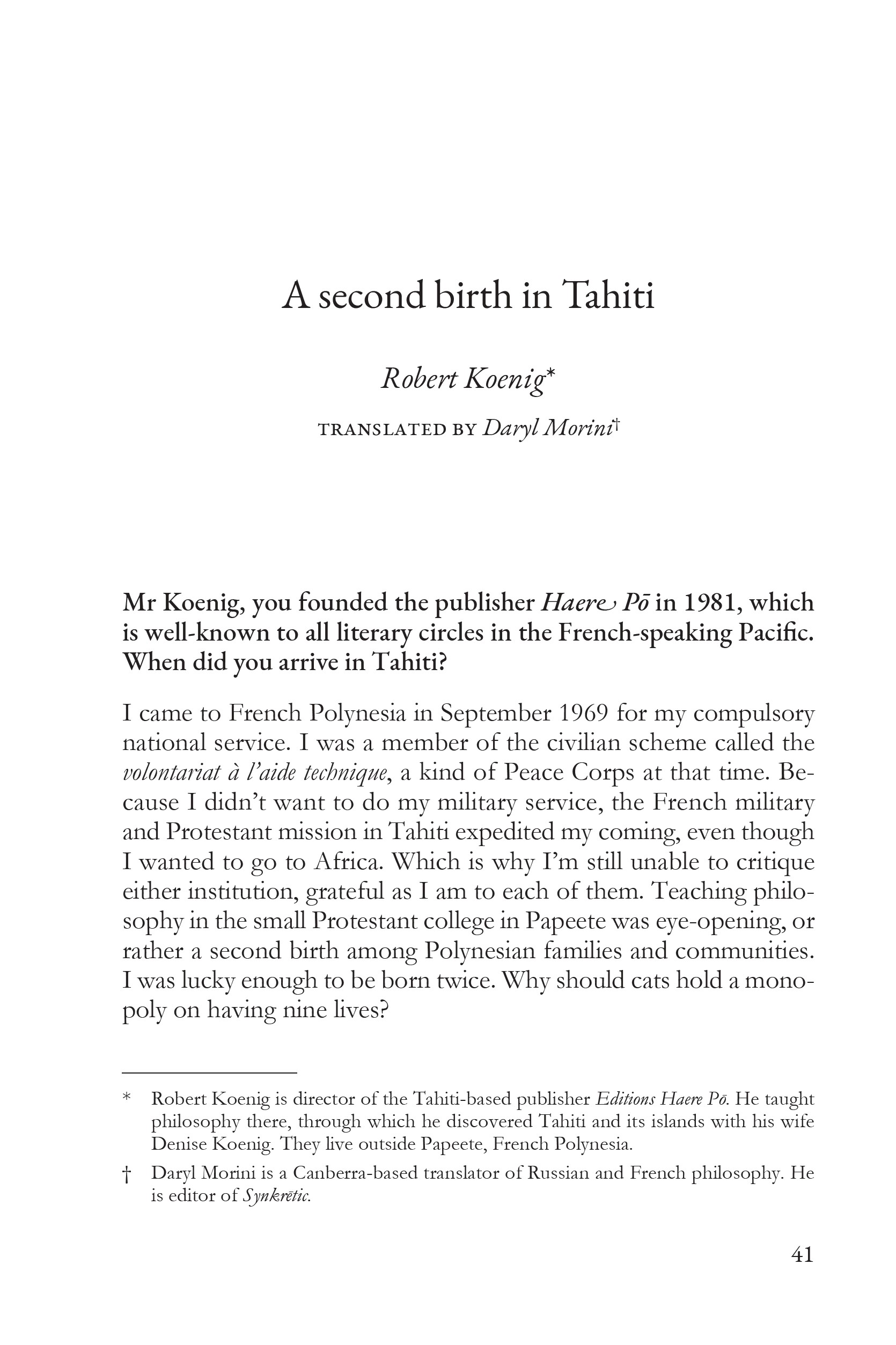 Mr Koenig, you founded the publisher Haere Pō in 1981, which is well-known to all literary circles in the French-speaking Pacific. When did you arrive in Tahiti?

I came to French Polynesia in September 1969 for my compulsory national service. I was a member of the civilian scheme called the volontariat à l’aide technique, a kind of Peace Corps at that time. Because I didn’t want to do my military service, the French military and Protestant mission in Tahiti expedited my coming, even though I wanted to go to Africa. Which is why I’m still unable to critique either institution, grateful as I am to each of them. Teaching philosophy in the small Protestant college in Papeete was eye-opening, or rather a second birth among Polynesian families and communities. I was lucky enough to be born twice. Why should cats hold a monopoly on having nine lives?

A unique path brings you to French Polynesia, that of philosophy.

That’s right. I taught philosophy or rather tried to teach it, and I remember throwing away all the lesson plans I had diligently prepared back in Alsace at the end of my second week in Tahiti. I took great pleasure in going to school for those 34 years, taking only two days off for my wedding and sick leave. I was fortunate enough to move around, teaching at Hermon Pastoral School, La Mennais Catholic College, and the Mamao School of Nursing—teaching my philosophy class each time. I delivered innovative lessons in civics on the political status of our islands and did my best to teach history and geography to junior college students in grades 6 and 5 [ed. – grades 7 and 8 in Australia] using the comic strip Rahan on prehistory and Alix on the Roman period.

Haere Pō books are beautiful and relevant to the whole Pacific region. When did this adventure begin?

Haere Pō means “nightwalkers”. This was chosen in response to Victor Segalen’s Immémoriaux, the story of a haere pō who trips over one word.1 This project was brought to life in 1981 by a group of friends, our passion for reading and learning, and the need to share what we felt by allowing people to read books we thought could help them to keep getting along. Our goal was to publish books that were entirely designed and printed in Tahiti, as in the early days of the London Missionary Society (LMS) across the Pacific, and in the official and unofficial languages of our islands. In French, Tahitian, Marquesan, in Paumotu, in “Australian”, even in English. We were neither monocultural nor monolingual, but came from multiple backgrounds including Chinese, Tahitian, Alsatian, Swiss, even Swiss-German. This helps to understand and respect the complexity of insular places. We have now published around 110 books in 40 years.

I understand that Haere Pō is an adventure which you have been on with your family.

Everything I say here—and everything I don’t say—wouldn’t have been possible without my wife Denise, who with loving care describes the sounds and colour of this world to me, colour-blind as I am!

You have taught philosophy in Europe and the Pacific. How did these different cultural contexts modify your method of instruction?

To try to teach philosophy in Tahiti means, firstly, doing everything you can to help students pass their written and oral exams to a respectable degree. That means writing dissertations on a given topic, providing coherent arguments over two or three sections while referencing classical sources, i.e. those taught in class. Philosophy has a delayed effect like some medications. With the only real question being whether curiosity, that is the desire to learn, can be taught. I would often try to inspire their desire for it using films, unusual documentaries, even books! I’d take them out to art exhibitions, to meet various prominent figures, and to observe court proceedings.

Which Western thinker was most relevant in Tahiti? Was it Socrates?

Some called my classroom “the cave”. Plato or rather Socrates and his Symposium and the second of Nietzsche’s Untimely Meditations were both at home in it. I preferred to ask questions, noting that questio is Latin for “to torture”, rather than giving answers. Catechisms exist for those whose curiosity is limited.

What differences have you observed between European and Polynesian philosophy?

The myths from the edges of the Mediterranean gave birth to the philosophical tradition, but Oceanian shores saw myths flourish that were remarkably full of lessons on how to live, on life experiences either lived or imagined, and on the potential for breaking and tearing oneself away from life to live anew. Making students pay heed to this rich tradition by discovering it myself was unexpected.

What did the Tahitian culture which you adopted teach you?

Living in Tahiti—around the time of the nuclear tests, of various tourism campaigns, and during its so-called cultural renewal and wokism—is to live in ancient, modern, and postmodern misconceptions and perhaps even prejudices. Meaning that it is to live in the ideas of those who live, think, dream in Königsberg, Berlin, Paris, London, Shanghai, and even Sydney. I often asked myself where and when I was living, hence my interest in and our books on the first contacts of European navigators and missionaries. While it’s easy to write about what one saw or thought one saw, I always tried to make students read between the lines, which was the only way of preserving their adolescent eyes.

In one of his works,2 the philosopher Immanuel Kant criticises Tahitians and their accursed happiness. Was Kant sad, and did he envy their happiness?

I’m not sure if Kant was sad. Can a watch be sad? Kant was famous for the fact that one could set one’s watch by observing him walking through Königsberg. If I recall correctly, he was “late” only once: after he read about the French Revolution in the newspapers. As for his attitude towards the Tahitians, is not thinking firstly thinking against something? Much as Kant did against Rousseau, against the simplifications of the myth of a “New Cytheria”, meaning a romantic paradise, as the French navigator Louis-Antoine de Bougainville named Tahiti in 1768.

If Kant had visited them, what would he have learned from the Tahitians?

It depends. In which period? Alongside Captain Cook and the Forsters on their second voyage from 1772 to 1775, when Kant was 48 years old? Or alongside LMS missionaries on the Duff in 1797? Perhaps he might have learned Tahitian like them using Peter Heywood’s manuscript3 at age 73! He could have gone to the Marquesas islands like William Crook4 or returned to London on their ship. In any case, he could have been inspired to write his 1798 Anthropology from a Pragmatic Point of View completely differently.

Is your publishing house confronted with the language barrier, which cuts off the English-speaking from the French-speaking Pacific like a great barrier reef?

Regarding publishing, we tried to release books for the English-speaking public living outside French Polynesia. It was a total failure. Too bad, as you say in English. But the Great Ocean is something that can separate as much as it can unite. Isn’t that what Epeli Hau‘ofa, a great Tongan thinker and theologian, once said?5 In the old days, the Spanish, British, French, German, and Japanese colonies drew borders across the so-called Great South Sea, and modern maps significantly extend these old borders with the addition of Exclusive Economic Zones. Could the Māori name for the Pacific, Te Moana-nui-a-Kiwa (which has nothing to do with the rugby team Moana Pasifika!), be a better alternative or a more holistic concept for half the surface of our Earth?

So, are the Pacific’s linguistic and cultural diversity more of an asset?

Yes, I think so. Is not monoculture, whether agricultural or cultural, one of the factors behind a warming climate and nationalisms? Becoming aware of our biodiversity firstly means trying to be skeptical of what we see and hear, and not stopping there.

Robert Koenig is director of the Tahiti-based publisher Editions Haere Pō. He taught philosophy there, through which he discovered Tahiti and its islands with his wife Denise Koenig. They live outside Papeete, French Polynesia.

Translated by Daryl Morini, a Canberra-based translator and editor of Synkrētic.

¹ Victor Segalen (1878-1919) was a French naval doctor posted to French Polynesia from 1903-1905. This inspired him to write Les Immémoriaux about the religious conversion of Tahiti’s Maohi people. See Victor Segalen, A Lapse of Memory, transl. Rosemary Arnoux (Brisbane: Boombana Publications, 1995).

² ‘Does the author really mean that if the happy inhabitants of Tahiti, never visited by more cultured nations, had been destined to live for thousands of centuries in their tranquil indolence, one could give a satisfying answer to the question why they exist at all, and whether it would not have been just as good to have this island populated with happy sheep and cattle as with human beings who are happy merely enjoying themselves?’ Immanuel Kant, ‘Review of J. G. Herder’s Ideas for the philosophy of the history of humanity. Parts 1 and 2 (1785)’, transl. Allen W. Wood, in Robert B. Louden and Günter Zöller (eds.), Anthropology, History, and Education (Cambridge: Cambridge University Press, 2007), 142. 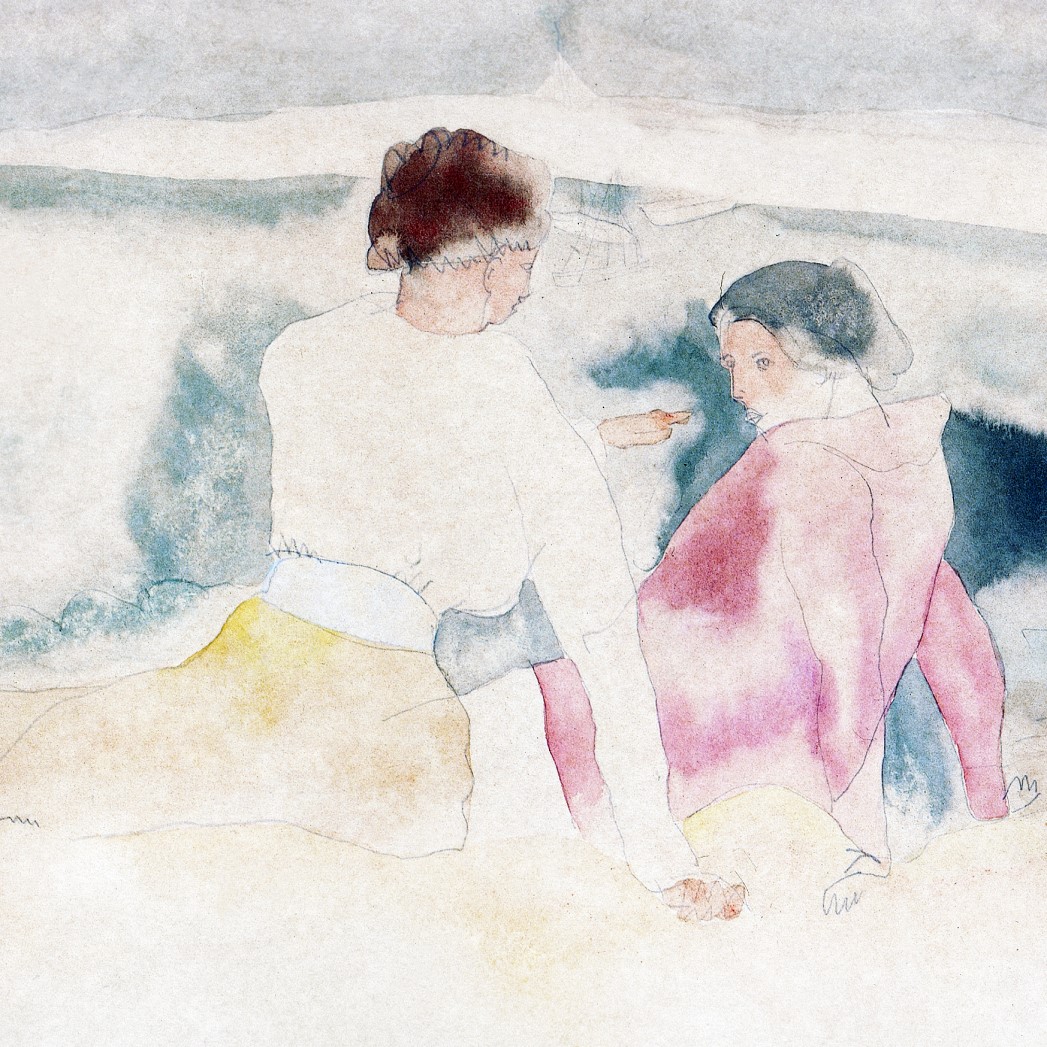 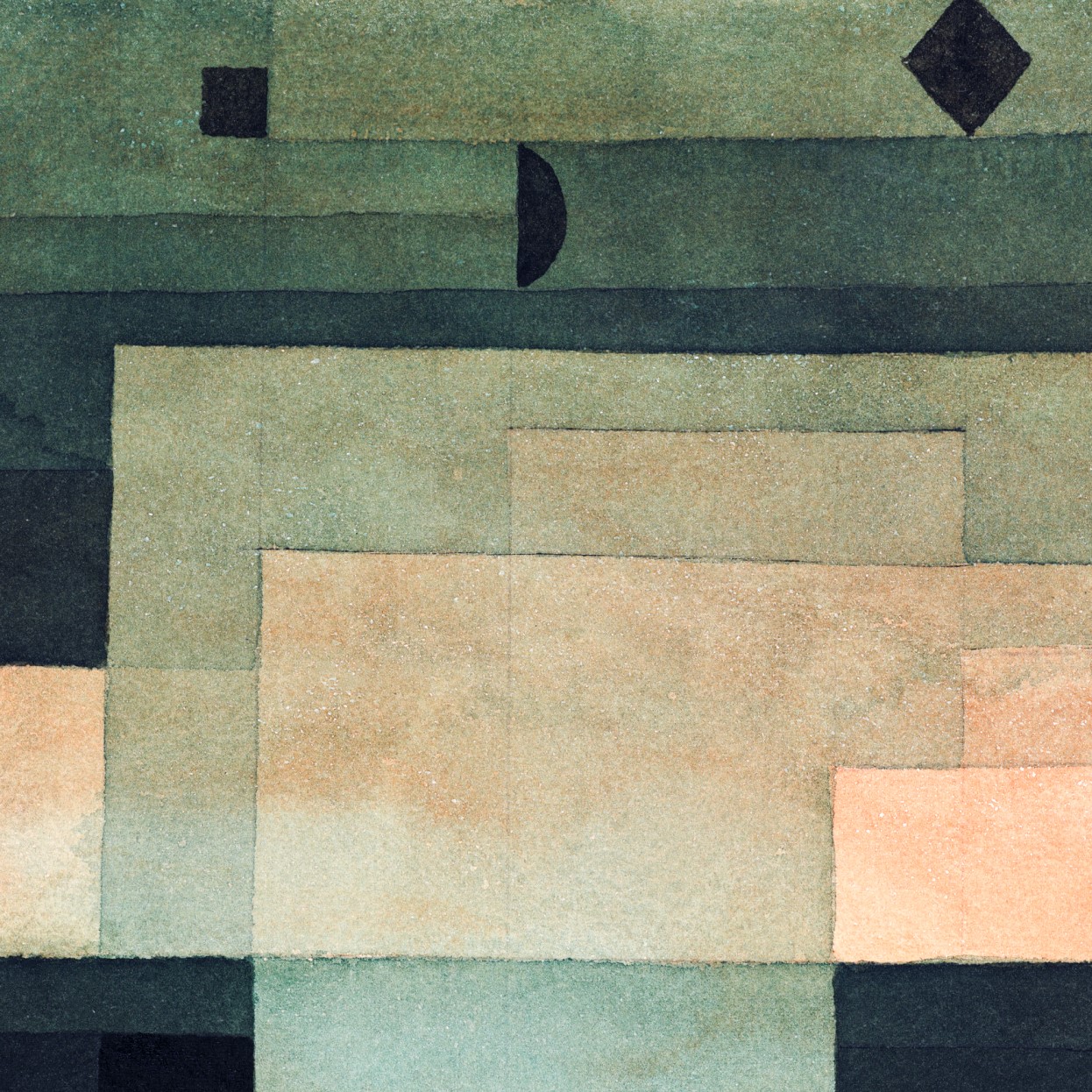 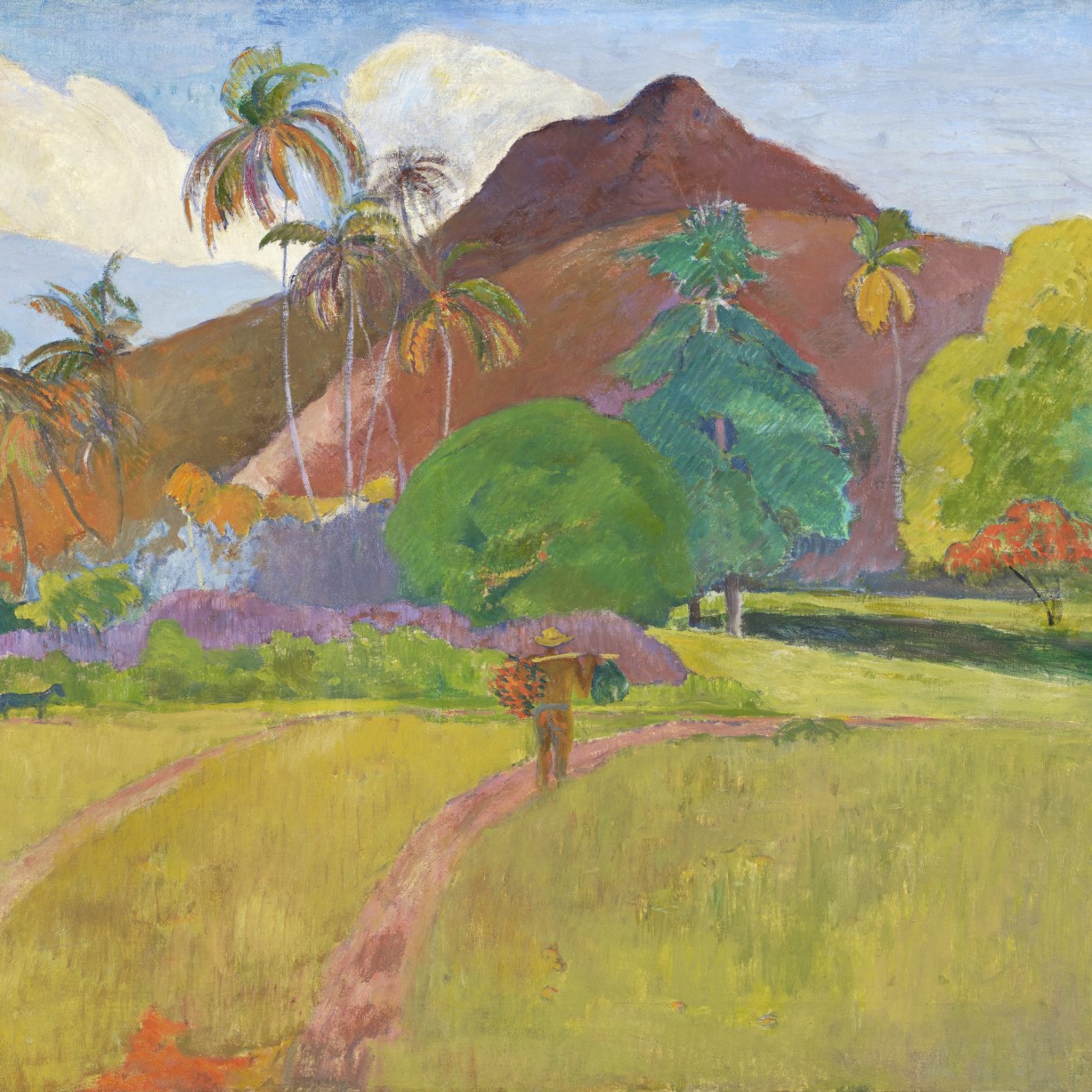