To not develop one’s talents, which is how Kant reads the Tahitians, is a violation of one’s duty. 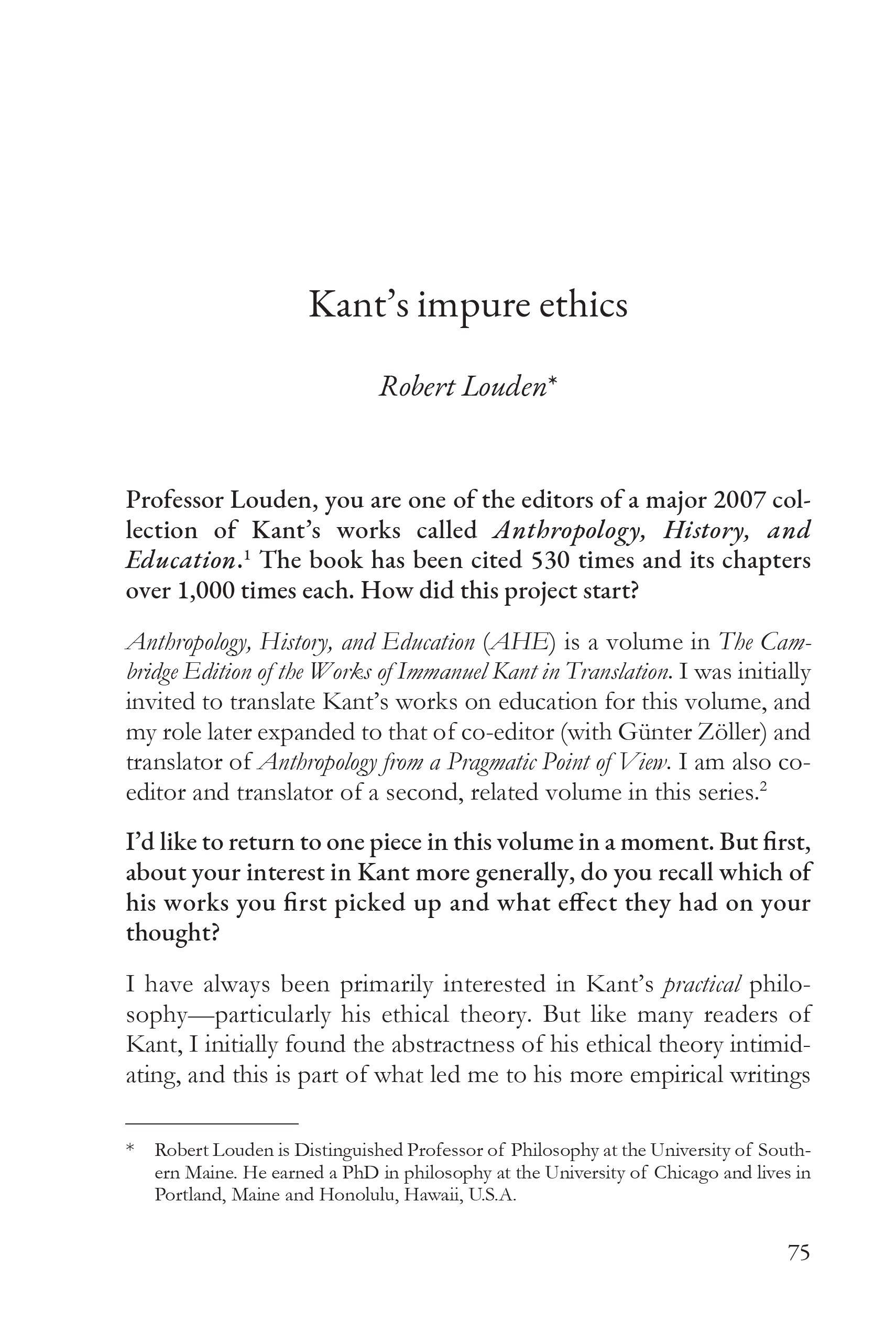 Professor Louden, you are one of the editors of a major 2007 collection of Kant’s works called Anthropology, History, and Education.1 The book has been cited 530 times and its chapters over 1,000 times each. How did this project start?

Anthropology, History, and Education (AHE) is a volume in The Cambridge Edition of the Works of Immanuel Kant in Translation. I was initially invited to translate Kant’s works on education for this volume, and my role later expanded to that of co-editor (with Günter Zöller) and translator of Anthropology from a Pragmatic Point of View. I am also co-editor and translator of a second, related volume in this series.2

I’d like to return to one piece in this volume in a moment. But first, about your interest in Kant more generally, do you recall which of his works you first picked up and what effect they had on your thought?

I have always been primarily interested in Kant’s practical philosophy— particularly his ethical theory. But like many readers of Kant, I initially found the abstractness of his ethical theory intimidating, and this is part of what led me to his more empirical writings  and lectures on ethics and human nature. However, I do believe that anyone with serious interests in Kant should examine his entire corpus. For me, the question of how the different parts of his system do (or don’t!) fit together has always been a very challenging puzzle.

In 2000, you wrote a book with the intriguing title of Kant’s Impure Ethics.3 Does this impurity refer to the content of his ethics, e.g. people are morally impure, or to something else?

In Kant’s Impure Ethics I was intentionally playing with an ambiguity in the word ‘impure’. For Kant, ‘impure’ means empirical or a posteriori, and my main argument was that his ethics contains more empirical or a posteriori content than most readers realise. But in ordinary speech, ‘impure’ means unclean or dirty, and I was also implying that his ethics is impure in this second sense as well.

In this book, you touch on the hotly debated question of Kant’s comments on Indigenous and non-white populations. Did your 2007 book, which translates relevant passages, start the debate on Kant’s attitude to race?

‘Start’ is an overstatement. Extracts of Kant’s writings on race were published back in 1963 in a book edited by Gabriele Rabel,4 and several of Mark Mikkelsen’s more recent translations5 were also published a few years before the ones in AHE. But I suspect that AHE has played a role in the English-language debate on Kant’s attitudes toward race.

In one piece, while writing an unfavourable review of a book by J.G. Herder, Kant criticises Tahitians for being as happy as cattle. He asks why they ‘exist at all’ if that’s all they do.6 Why did their enjoyment bother him?

Unlike many contemporary ethical theorists, Kant holds that we have duties to ourselves as well as to others. Indeed, on his view, duties to ourselves are the foundation and pre-condition of all duties. The duty to develop one’s talents is one of the primary duties to oneself, but it is also an imperfect duty (it doesn’t prescribe exactly what to do, but merely presents us with a broad goal to pursue). Individual agents need to use their discretion in deciding how best to fulfil this duty, after carefully assessing their own particular situation and interests. Some agents will choose to develop their athletic talents, others will strive to become musicians, etc. But to choose not to develop any of one’s talents, which is how Kant reads the Tahitians, is a basic violation of one’s duty, in addition to being inconsistent with the categorical imperative.

You have argued that this quote is often misunderstood, that Kant wasn’t attacking the Tahitians per se but was critiquing human beings everywhere who are just enjoying themselves.7 But, still, why is that a problem for Kant?

Kant reads people who are ‘just enjoying themselves’ as people who have intentionally decided not to cultivate any of their talents and rational capacities—again, a violation of duty that is inconsistent with the categorical imperative. Part of what he means here is that such a decision cannot be universalised without contradiction. If everyone were to make such a decision, humanity would not survive.

Some argue that Kant’s comments on the Tahitians are proof of his racism8 and of the genocidal seed in his ideas.9 You have written that Kant did not defend the genocide of non-Europeans.10 Was he racist towards Tahitians?

Yes, clearly Kant was ‘racist towards Tahitians’—as well as towards all other non-whites. But when he writes that the non-white races will eventually die out, he is making an empirical prediction (one that was unfortunately shared by a great many white colonialists in the nineteenth and early twentieth centuries). He is not advocating the mass murder of specific racial groups. As he remarks in the Pillau anthropology lecture:

We find peoples who do not appear to have progressed in the perfection of human nature, but have reached a standstill, while others, such as the Europeans, are always progressing…[I]t appears that all of the Americans will be wiped out, not through acts of murder—that would be cruel!—but rather they will die out.11

In your book, you cite French philosopher Diderot’s Supplement to the Voyage of Bougainville. Do we know if Kant read that work, and where else he got his ideas about Tahiti? He cites Captain Cook’s diary at one point.

Diderot’s Supplement to the Voyage of Bougainville, though written in 1772, was not published until after his death in 1796. And I believe that all of Kant’s remarks about Tahitians predate 1796. However, Kant does cite Bougainville as well as Cook several times. Diderot’s Supplement is an important counter-voice in Enlightenment debates about non-Europeans. Not all Enlightenment intellectuals were convinced that the West is the Best. But the Supplement has its own vices. Ultimately, it is more a projection of Diderot’s own views than an accurate description of Tahitian culture.

Kant talks about non-white races like the Tahitians dying or being ‘wiped out’ (ausgerottet) for lacking the skill, drive, and ‘germs’ (Keime) of whites.12 Was he a social Darwinist ahead of his time or is his theory different?

I see similarities as well as differences between Kantianism and Social Darwinism. One basic similarity is that both outlooks stress a version of ‘only the strong survive’. But Kantianism has a theological dimension that is missing in Social Darwinism. On Kant’s view, Providence has a plan for the human species, one that unfortunately grants more progress to some races than others.

In an era in which many fear that the faculty of reason and rationality as standards of thought and ethical behaviour are being trampled on around the world, what part of Kant’s ethics do you think stands the test of time?

I do think Kant’s categorical imperative—particularly the formula of Humanity as an End in Itself (‘So act that you use humanity, in your own person as well as in the person of any other, always at the same time as an end, never merely as a means’13)—is a sound moral principle that has stood the test of time. Additionally, there are several aspects of the political side of Kant’s practical philosophy—e.g., the core commitment to human rights, a strong system of international law, and a federation of democratic states devoted to peace—that are sorely needed at present.

⁶ ‘Does the author really mean that if the happy inhabitants of Tahiti, never visited by more cultured nations, had been destined to live for thousands of centuries in their tranquil indolence, one could give a satisfying answer to the question why they exist at all, and whether it would not have been just as good to have this island populated with happy sheep and cattle as with human beings who are happy merely enjoying themselves?’ Immanuel Kant, ‘Review of J.G. Herder’s Ideas for the philosophy of the history of humanity. Parts 1 and 2 (1785)’, transl. Allen W. Wood, in Robert B. Louden and Günter Zöller (eds.), Anthropology, History, and Education (Cambridge: Cambridge University Press, 2007), 142.

⁹ Robert Bernasconi, ‘Why Do the Happy Inhabitants of Tahiti Bother to Exist at All?’, in Genocide and Human Rights: A Philosophical Guide, ed. John K. Roth (New York: Palgrave Macmillan, 2005), 139-148. 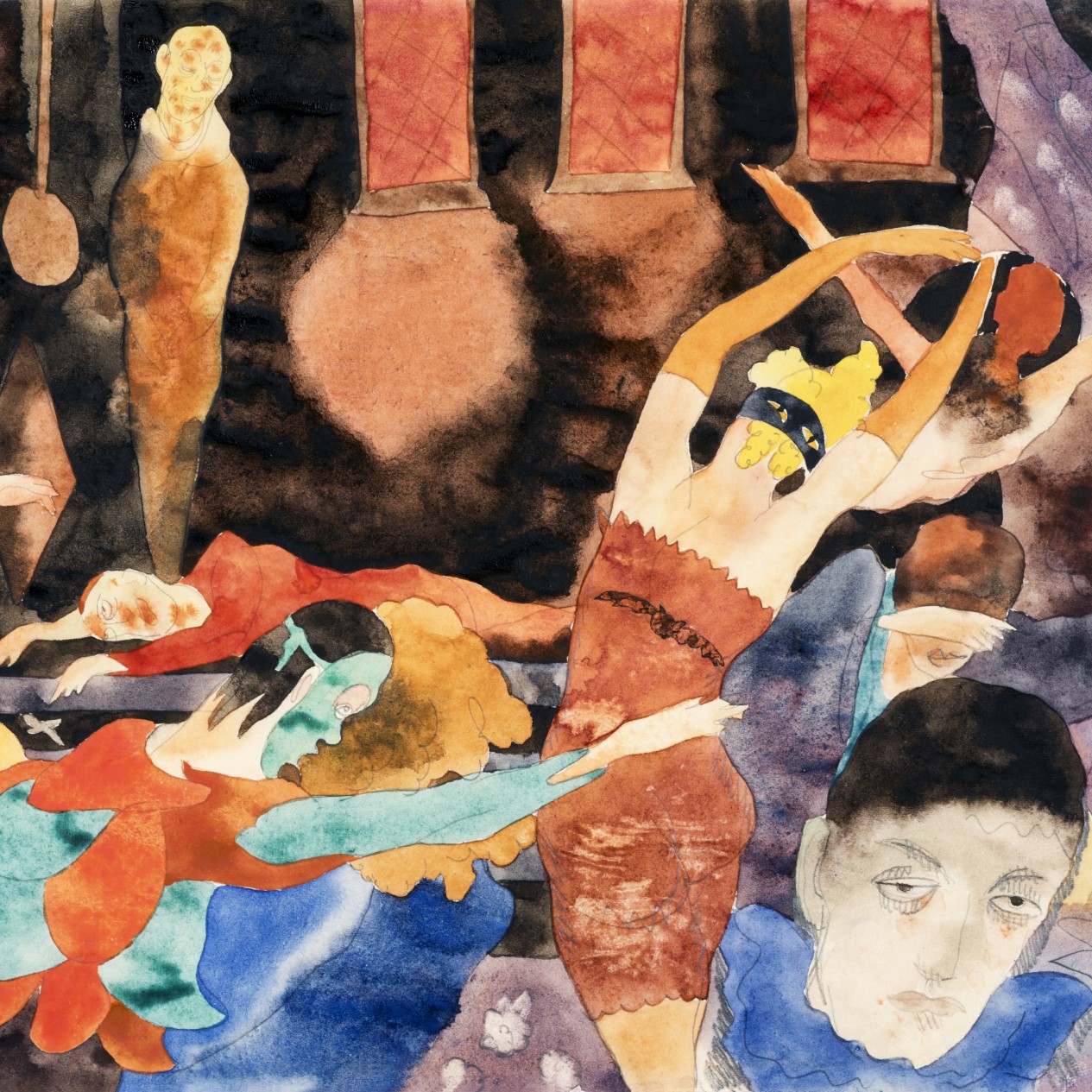 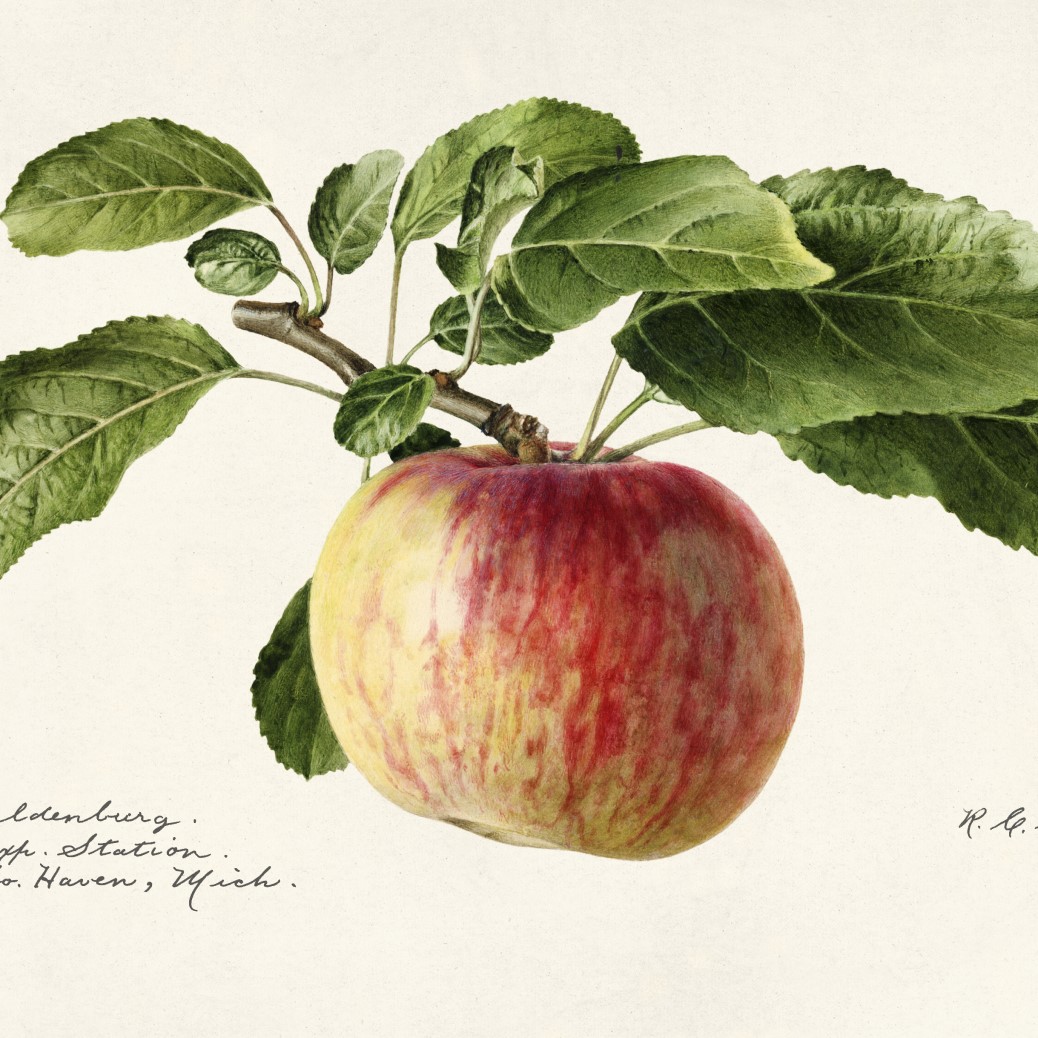 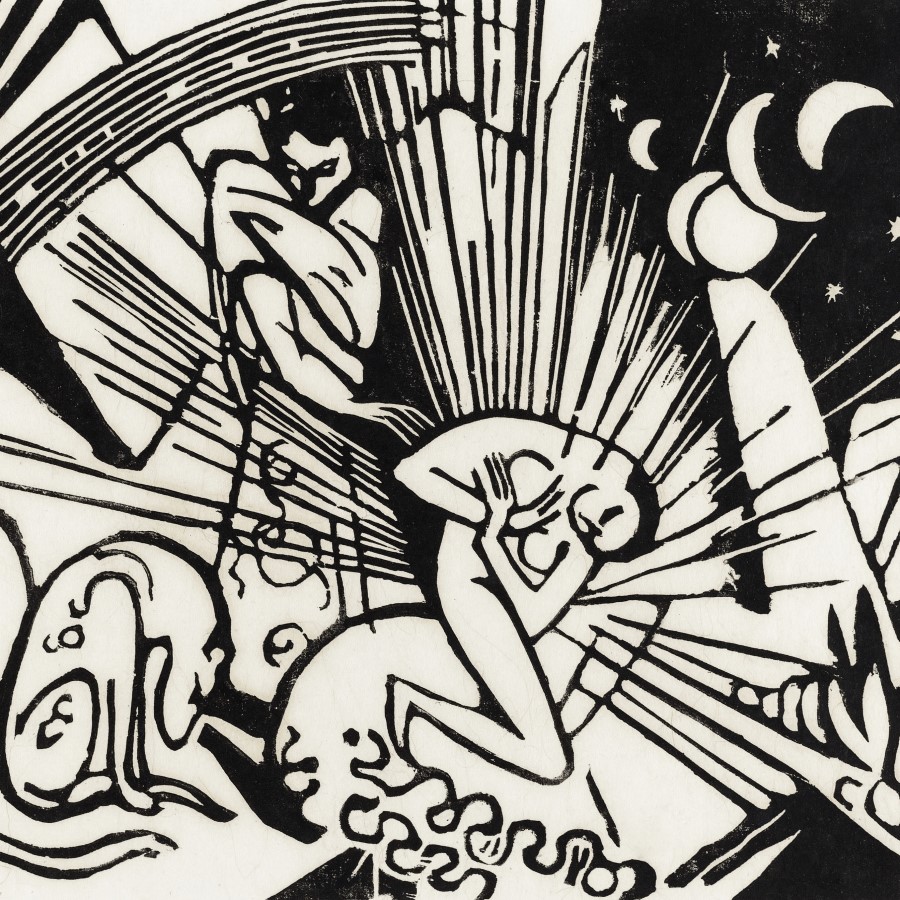