The sustained impact of Tahiti on the European mind has not been emphasised enough. 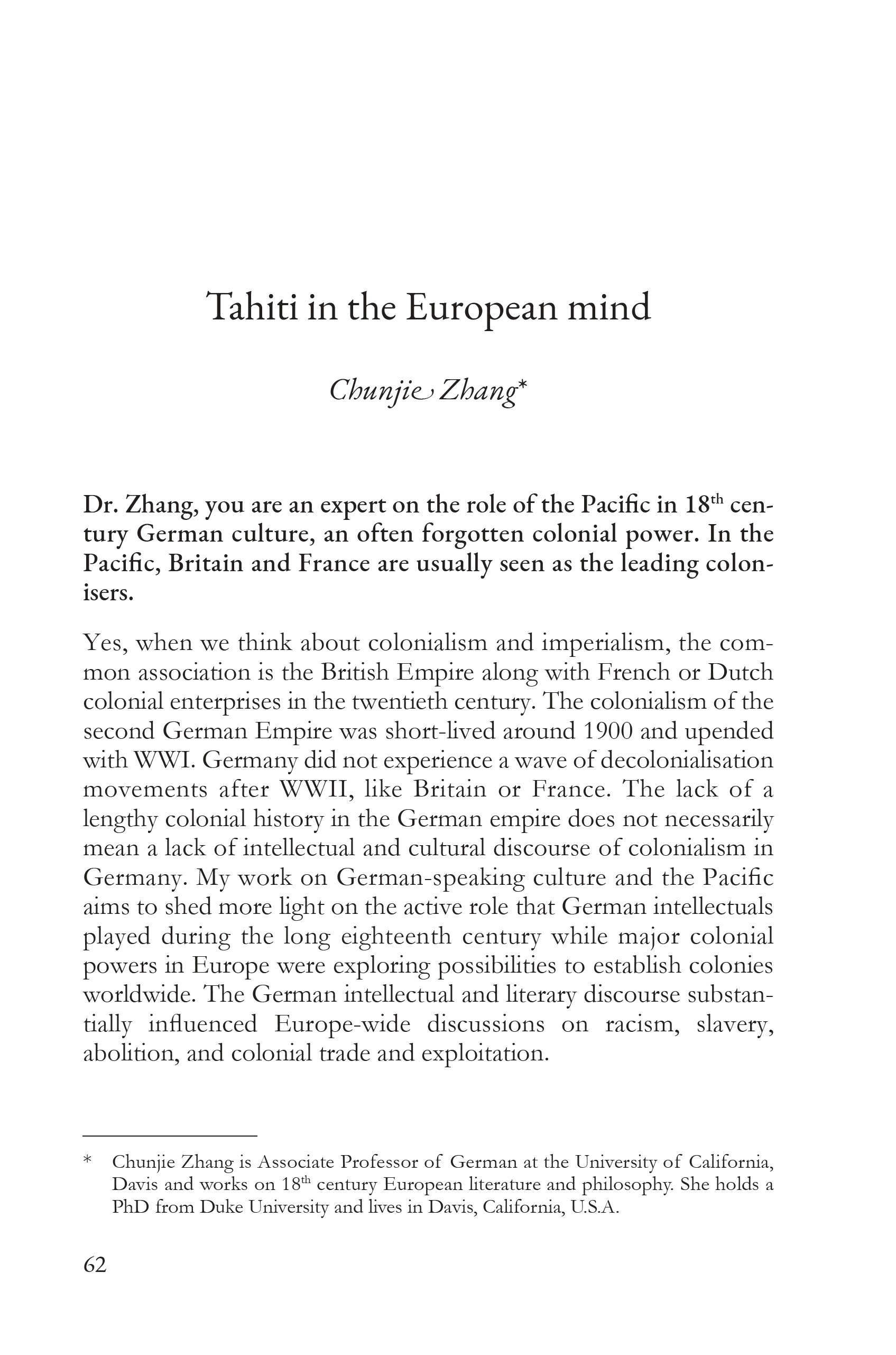 Dr. Zhang, you are an expert on the role of the Pacific in 18th century German culture, an often forgotten colonial power. In the Pacific, Britain and France are usually seen as the leading colonisers.

Yes, when we think about colonialism and imperialism, the common association is the British Empire along with French or Dutch colonial enterprises in the twentieth century. The colonialism of the second German Empire was short-lived around 1900 and upended with WWI. Germany did not experience a wave of decolonialisation movements after WWII, like Britain or France. The lack of a lengthy colonial history in the German empire does not necessarily mean a lack of intellectual and cultural discourse of colonialism in Germany. My work on German-speaking culture and the Pacific aims to shed more light on the active role that German intellectuals played during the long eighteenth century while major colonial powers in Europe were exploring possibilities to establish colonies worldwide. The German intellectual and literary discourse substantially influenced Europe-wide discussions on racism, slavery, abolition, and colonial trade and exploitation.

In your book Transculturality and German Discourse in the Age of European Colonialism,1 which built on your doctoral work,2 you write about Georg Forster who went to Tahiti with Captain Cook in 1772-1775.3 He was torn between the ideas that it was a paradise and uncivilised. Was this ambivalence towards Tahiti common?

Forster provided a unique perspective due to his special status as a scientist onboard Cook’s expedition and his foreigner status of being ethnically German with a work contract for the British. His travel writing, translated from English into German by himself, was a huge success in Germany and established the South Sea myth of paradise in central Europe. I think Forster was more impressed and fascinated with Tahiti rather than dismissing it as “primitive”. He was torn between his admiration for Tahiti and his choice of not staying there for good. My point is that Forster was strongly influenced by the Tahitian way of life and he transported this admiration back home to Germany. It is the sustained impact of Tahiti on the European mind that has not been emphasised enough.

You note that Forster’s travel writings—and his 1778 book Voyage Round the World4 in particular—shaped European ideas about Tahiti, which for context you note was then the second most popular genre after novels.

Yes, travel writings were very popular, even though the novel was still an emerging genre that aroused a passion for reading (among young women) and, at the same time, skepticism and critique of this fervent interest. It may be a bit similar to today’s videogames. But travel writings were an important repository of ethnographic knowledge and cultural-philosophical speculations about non-European places in European tradition. Forster managed to turn travel writing into a serious science.

Very interesting. It’s easy to forget the role of the Pacific in European culture. You compare the impact of Forster’s work then to ‘the landing on the moon and having an astronaut at one’s dinner table in the 1960s.’

Haha, yes, Forster was invited to German courts and instantly became a celebrity after the German publication of his Voyage Round the World. He was offered a position as a natural history professor at the Collegium Carolinum in Kassel. That solved his financial issues, which had been caused by his father’s feud with the British Admiralty over his right to publish his own travel writings.

The naturalist Alexander von Humboldt, who visited Australia among other places, also saw his mentor Forster as a world authority on Tahiti and other ‘happy islands of the Pacific’. Was that happiness trope popular back then?

Yes, Humboldt grew up steeped in this South Sea myth and sees Forster as an authority on the matter of scientific travel writing. Indeed, Forster endeavoured to write a fact-based travelogue instead of a fantasy-filled account to quench consumers’ thirst for curiosity. That ideal served as a model for Humboldt.

Were Rousseau’s theories a direct influence on Forster’s idea that Tahiti was an earthly paradise, or is it more the case that both men drank from the same cultural waters? Rousseau’s theory of the noble savage was indeed very influential in the eighteenth century. Yet, from my reading of Forster’s writing, I feel that Forster was more directly influenced by what he experienced in Tahiti rather than imposing preconceived ideas on the Tahitians. Of course, Forster was not completely prejudice-free, but he strived to write based on his scientific findings instead of looking at things as though through ‘coloured glass’, as he terms it.5 That’s why I consider Forster’s writing remarkable in the eighteenth century.

Another part of this Edenic myth equated Tahiti with sexual freedom, as captured by the traveller Bougainville’s and philosopher Diderot’s writings, and in Paul Gauguin’s paintings later. Even king Frederick William II had a strange Tahitian fantasy. This was totally mainstream in Europe, wasn’t it?

That’s correct. The idea of paradise is deeply connected to the satisfaction of our basic desires. Freud’s psychoanalysis could be largely seen as a critique of the social suppression of desire in the Victorian era. The European sailors’ experiences in Tahiti and the South Sea in general fuelled the fantasy of unrestrained sexuality, quite unlike the Christian mores in Europe. At the same time, a thinker like Denis Diderot used this hearsay to enunciate his critique of the Catholic Church during the Enlightenment. Gauguin used East Asian Buddhist paintings to portray nudity in a Tahiti of his fantasy. Thus, Forster’s contribution to a more or less factual account of Tahiti was even more valuable vis-à-vis the other ends Tahiti was made to serve in the European imagination.

In a review of his former student J.G. Herder, even philosopher Immanuel Kant famously asked why Tahitians bother to ‘exist at all’, and whether it would not have been better for ‘happy sheep and cattle’ to live there if being happy is all the Tahitians do.6 Why did he so disdain Tahitian happiness?

I am not quite familiar with this expression of Kant’s. If it is true, it is definitely an arrogant and ignorant European colonial attitude to dismiss other cultures. At the same time, Kant was very interested in non-European cultures. He was an avid reader of travel writings, befriended seamen at the port city of Königsberg, and lectured regularly for decades on the anthropology, geography, and botany of the world in his lecture course on physical geography. Indeed, Kant developed his theory of race in his book Anthropology as part of the lecture script of this course.

Kant never went to Tahiti—he never left Königsberg. So, did his views rest on the same European clichés about Tahiti which he inherited uncritically? Or did they reflect his own racism as some argue,7 or some other factors?

Kant was an avid reader of travel writings and enjoyed conversing with seamen about their experience abroad. Kant, as well as many other European thinkers of the time, was keenly interested in systematising the “findings” of the European expeditions into categories and typologies. Kant’s racism was a product of his time, along with the dismissive language about Africans and Asians. Yet this happened before the dominance of European imperialism between 1850 and 1950. However, the coloniser’s use of such philosophical accounts as authority to justify and support colonial exploitation and racial discrimination in policies and laws is a different issue.

You worked on German cultural ties with China, Japan, India, Vietnam, and the Pacific. That’s fascinating. Is there much interest in Germany today in the cultures of former Pacific colonies, parts of PNG and Solomon Islands?

Franz Kafka’s short story In the Penal Colony (1919) is set in the Pacific, I believe. The contemporary Swiss-German writer Christian Kracht’s novel Imperium (2012) is set in German New Guinea. There is also a wave of decolonisation in German and European museums these days to return looted artefacts, mostly to African countries. But I am not sure whether the Pacific Islands were among the countries that would receive any repatriations.

Chunjie Zhang is Associate Professor of German at the University of California, Davis and works on 18th century European literature and philosophy. She holds a PhD from Duke University and lives in Davis, California, U.S.A.

² Chunjie Zhang, ‘Views from the Other Side: Colonial Culture and Anti-Colonial Sentiment in Germany around 1800’, Doctor of Philosophy, Department of Germanic Languages and Literature, Duke University, 2010.

³ Johann George Adam Forster (1754-1794), known also as Georg Forster, was a German naturalist who at the age of 17 took part, then as an assistant to his father Johann Reinhold Forster (1729-1798), in James Cook’s second expedition to the Pacific. He was a major figure of the Enlightenment in Germany and maintained a correspondence with Georg Christoph Lichtenberg, some of whose work features in this issue of Synkrētic.

⁴ George Forster, A Voyage Round the World in His Britannic Majesty’s Sloop, Resolution, commanded by Capt. James Cook, during the Years 1772, 3, 4, and 5 (London: B. White et al., 1777). This work is in the public domain and available on archive.org.

⁶ ‘Does the author really mean that if the happy inhabitants of Tahiti, never visited by more cultured nations, had been destined to live for thousands of centuries in their tranquil indolence, one could give a satisfying answer to the question why they exist at all, and whether it would not have been just as good to have this island populated with happy sheep and cattle as with human beings who are happy merely enjoying themselves?’ Immanuel Kant, ‘Review of J. G. Herder’s Ideas for the philosophy of the history of humanity. Parts 1 and 2 (1785)’, transl. Allen W. Wood, in Robert B. Louden and Günter Zöller (eds.), Anthropology, History, and Education (Cambridge: Cambridge University Press, 2007), 142.

⁷ Robert Bernasconi, ‘Will the real Kant please stand up: The challenge of Enlightenment racism to the study of the history of philosophy’, in Radical Philosophy, Issue 117 (January/February 2003): 13-22. 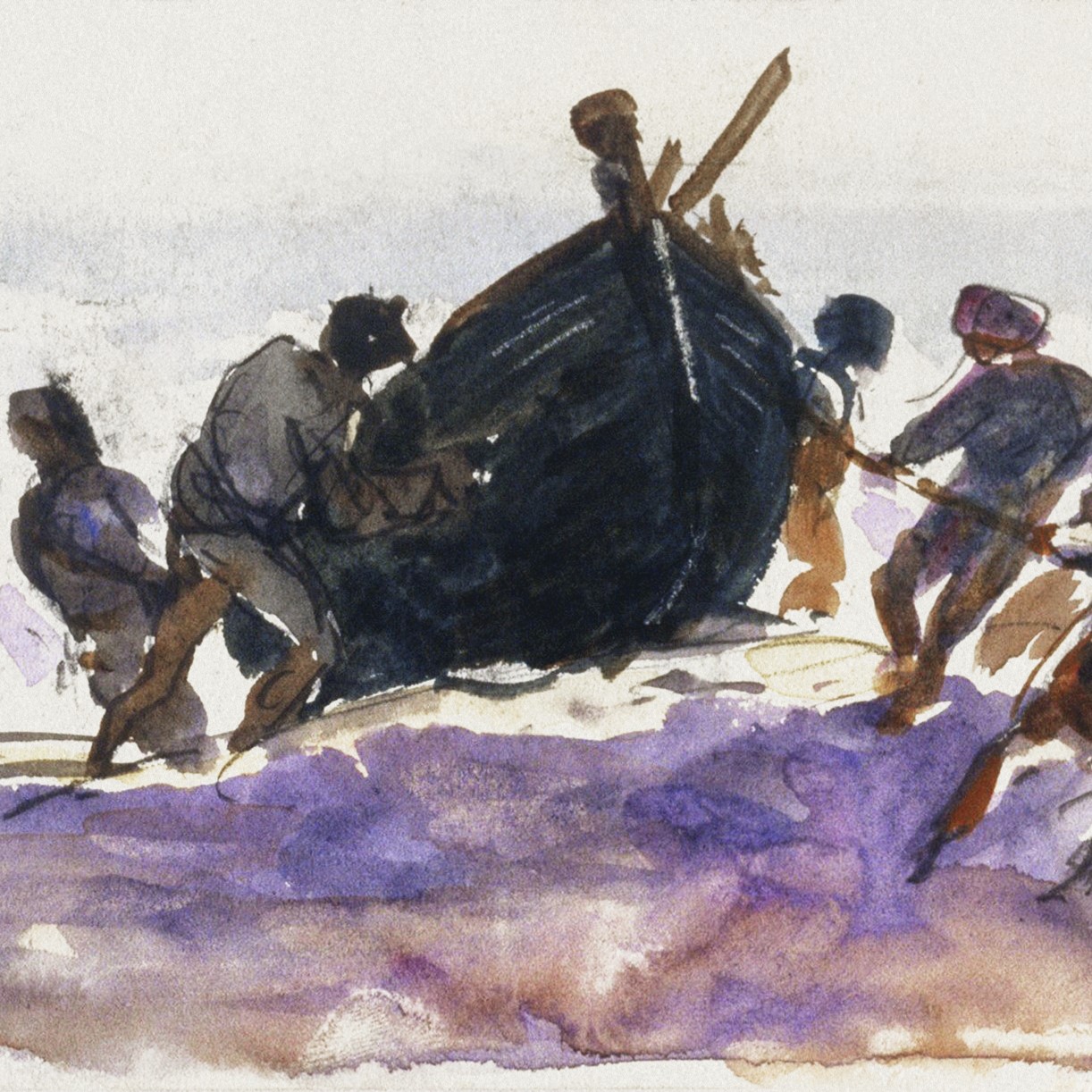